“I do not feel obliged to believe that the same God who has endowed us with sense, reason, and intellect has intended us to forgo their use.” -Galileo Galilei (1564-1642)

“No longer drink only water, but use a little wine for your stomach’s sake and your frequent infirmities.” -I Timothy 5:23 (Paul giving some instructions to Timothy about various things)

Also note that Luke, the writer of Luke and Acts in the New Testament, was a physician.

-Luke the beloved physician and Demas greet you.
Colossians 4:14

If being a physician or practicing medicine was a bad thing, then undoubtedly Paul would not have used it as a term of endearment…

Charles Spurgeon, one of those famous dead preachers once said this:

And undoubtedly God has given us a brain that can learn, and the ability to pursue fields in science and medicine. We can also use this ability for selfish reasons.

The military establishment, for instance, funds about 60% of all scientific research in this nation. Another good-sized portion of scientific research in America is centered around business and making money. Roughly speaking, it is safe to conclude that the vast majority of our research and development in the United States is not spent on finding cures and treating illnesses. Just as a gut reaction, do you think this is God’s intention for science? To learn new and better ways to fight other nations? Or to learn new and better ways to make a dollar? END_OF_DOCUMENT_TOKEN_TO_BE_REPLACED

Why is this true?

JESUS SPEAKING TO THE PEOPLE IN HIS HOME TOWN:
“I tell you the truth,” he continued, “no prophet is accepted in his hometown. 25I assure you that there were many widows in Israel in Elijah’s time, when the sky was shut for three and a half years and there was a severe famine throughout the land. 26Yet Elijah was not sent to any of them, but to a widow in Zarephath in the region of Sidon. 27And there were many in Israel with leprosy in the time of Elisha the prophet, yet not one of them was cleansed—only Naaman the Syrian.” -Luke 4:24-27 [NIV]

First, Jesus was making a larger point to the Jews. He brought this up because in both of these examples from Israel’s history, God withheld blessing from his people and instead gave assistance to non-Jews. This was symbolic of what was happening in Jesus day. The Jews, God’s people, wouldn’t accept Jesus and so while God would bless the non-Jewish world through Christ, the Jews would be left out. In fact, their nation would cease to exist about 35 years after this in 70 AD when the Romans wiped them out.

But there’s another question.

Why is it true that God blessed two people, curing Naaman the Syrian of leprosy and providing food for a non-Jewish widow, while at the same time Jews were dying of leprosy and Jewish widows were starving to death?

Why doesn’t God give a miracle every time? Or more to the point… Why doesn’t THIS appear to be true all the time?

THE BOOK OF JAMES, GIVING VARIOUS INSTRUCTIONS AT THE END
13Is any one of you in trouble? He should pray. Is anyone happy? Let him sing songs of praise. 14Is any one of you sick? He should call the elders of the church to pray over him and anoint him with oil in the name of the Lord. 15And the prayer offered in faith will make the sick person well; the Lord will raise him up. If he has sinned, he will be forgiven. 16Therefore confess your sins to each other and pray for each other so that you may be healed. The prayer of a righteous man is powerful and effective. -James 5:13-16 [NIV]

Without looking very deeply, this passage obviously seems to say that if the elders of the church anoint someone with oil and pray for them, they will get well. Period. They will be healed. Yet I know of times when this doesn’t seem to work. Someone prayed for by the elders, even anointed with oil according to the verses above, doesn’t always get better. Or least not for as long as we’d like. Why? END_OF_DOCUMENT_TOKEN_TO_BE_REPLACED 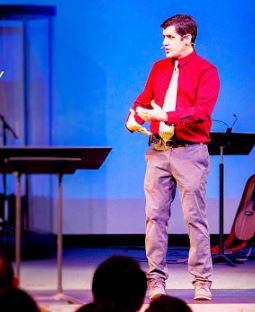 Brian Ingalls serves as the Lead Minister of Tyro Christian Church. He received an M.Div. from Liberty University and is currently working toward a PhD in the Old Testament at Midwestern Baptist Theological Seminary. Faith in Jesus and the truth of the Bible are part of his core beliefs. Brian and his wife Sheryl also enjoy being the parents of three amazing young adults. He can be contacted through the Tyro website: www.tyrochristian.org